Cardinals Care, the official non-profit arm of the St. Louis Cardinals, was established to give fans a way of teaming up with Cardinals players and the organization to help children in our community – both on and off the baseball field.  Since it was established in 1997, Cardinals Care has invested over $21 million to support St. Louis area children, and has built 21 youth ball fields in local under-resourced neighborhoods.

Twice per year, Cardinals Care distributes grants to area non-profit organizations that support local youth during a ceremony held at Busch Stadium. During this year’s Spring grant ceremony, held on May 4th at Busch Stadium, Cardinals Care distributed over $130,000.00 to 64 area non-profit groups! Team President Bill DeWitt III and Vice President of Community Relations & Executive Director of Cardinals Care Michael Hall were on hand at the ceremony, as well as Cardinals outfielder Jeremy Hazelbaker. We are thrilled to have the opportunity to invest in our community partners, and we look forward to our continued efforts in making a positive difference in our community!

Cardinals Care Grant Ceremony hosted by Dan McLaughlin at Busch Stadium in St. Louis, Missouri on May 4, 2016. Jeremy Hazelbaker was the guest Cardinal in attendance along with Cardinals President Bill DeWitt III and V.P. Michael Hall. 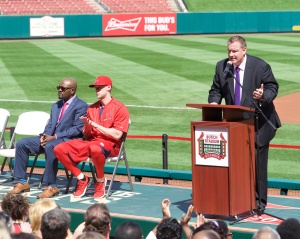 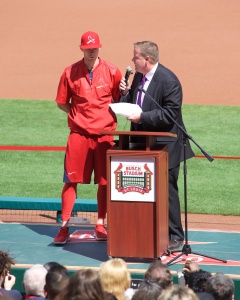 About Cards in the Community

Impact Beyond the Game: An official blog of the St. Louis Cardinals highlighting the club's work in the local community